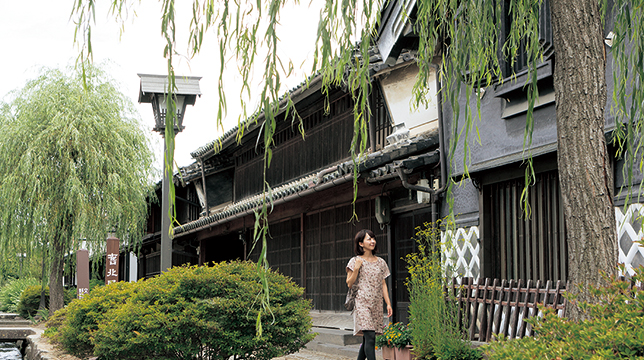 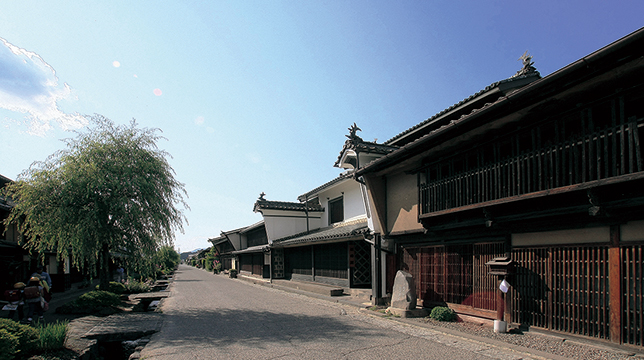 The streets of Unnojuku include buildings in the style of Edo period inns, thatched roofed buildings, and rugged buildings used for raising silkworms from after the Meiji era, all well-harmonized together to form a traditional line of houses.
Water flowing in the middle of the road, with beautiful houses covered with latticed doors lined up on both sides, gives a quiet and peaceful feel reminiscent of the town’s history.
In addition, the area around Shiratori Shrine, the god of Unnojuku, tells the history of the shrine, at the center of which is a zelkova tree that is over 700 years old. In the annual festival every April the old custom of twelve large banners being lined up along the road is still practiced.
Unnojuku Fureiai festival is held on November 23, when period costumes and rickshaws are brought out and the bustle of the inaugural post office is revitalized.

Unnojuku was established as a Hokkoku Kaidō highway post town in the second year of Kanei (1625). The Hokkaido Highway was an important road connecting the Nakasendo (Central Mountain Route) and the Hokurikudō (Northern Land Route). In addition to the diplomatic exchanges of various daimyo in Hokuriku, and the transportation of gold collected at Sado, travel between Edo was also frequent and there were many visitors to Zenkō-ji.
The nearby Tanaka post town was damaged by a flood in the second year of Kanpo, and since the inn for government officials moved to Unnojuku with 59 post horse houses, and 23 lodgings, it became very busy.
Once the Meiji era began and lodging was ended, Unnojuku became a sericulture village.
With the traditional houses being preserved until modern times, the area was selected as one of “Japan’s Hundred Best Roads” in 1986 and as a “National Conservation District of Traditional Buildings” in 1987.

“Hon udatsu” is from the Edo period, and “Sode udatsu” is from the Meiji era. Neither of these were feasible except for with rich houses. From such a place, the phrase “Udatsu ga agaranai (You can’t improve your station in life)” was born.
The lattices called “Unno lattice” are from the Edo period and can be seen in the second floor projecting lattices. They are built in alternating patterns of two long and two short lattices, weaving a beautiful pattern peculiar to Unnojuku.
“Dashigeta (projecting beams)” are from Edo period inn architecture and “kinuki (roof vents)” were a symbol of Meiji Era sericulture architecture.

About the parking lot